About The Happy Goddess

A magical tale of how Sandra became The Happy Goddess...

The Story of The Happy Goddess 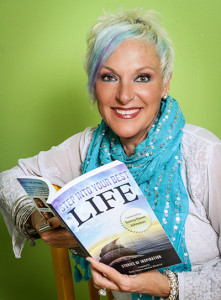 Sandra a.k.a. Happie G is the United States Heal Your Life® Teacher & Coach Trainer and the owner of a delightful business (The Happy Goddess®) designed to help people live HAPPY by fully embracing their inner and outer beauty. Sandra has a Master’s Degree in Business and 20+ years of experience in Corporate America with a good number of those years spent in Training & Development. She has had a Mary Kay business for 20 years with 6 years as a Sales Director. Sandra received her Heal Your Life® Teacher certification in May of 2006, Life Coach certification in May of 2009, and  Teacher Trainer in October of 2016 and Coach Trainer in October of 2017.

Sandra grew up in a family of five, attended school, watched and read Disney classics, was a brownie scout all the way up to a cadet, shook the pom poms as Captain, sang in the select choir at school, and attended professional bowling school while on the high school bowling team. She also grew up watching public television, listening to Dr. Leo Buscaglia, and washing her hands over and over to avoid getting worms.

As a young adult, Sandra left home and began working at the local bank. This would prove to be a pivotal life experience. Sandra learned the value of teamwork, how to become a leader, how to communicate effectively and she developed friendships that she maintains today. Additionally, she gained invaluable life lessons from her very first boss and mentor, Zenobia Carter. Sandra is grateful for her time spent in the world of banking and especially for financing her MBA.

Following every girl’s dream and seeking security, Sandra married at the age of 21. Her now ex-husband was using the ATM machine one night after hours. It is a funny story from there. During this time, she became competitive, learned a lot about organ donation (he had a donated kidney), got physically fit, gave up sugar and white flour and elected to give up red meat forever. At the age of 28, while in Thailand, this dream ended. They flew back in separate sections of the aircraft.

Next, while at work, future ex-husband number two entered. He worked in Human Resources and she worked in Training & Development. He would cover phones during lunch breaks. During this time, she co-habited without marriage, camped, learned to like hockey and cold arenas, maintained her physical shape, taught him how to cycle, climbed the corporate ladder, acquired a loving fur person companion, Rizo the cocker spaniel, and waited to “officially” marry (having had the first marriage annulled by the Catholic Church), until mutual Master Degrees were achieved. This dream ended rather abruptly after the achievements were met and a life-changing physical move to Houston, Texas. After the U-Haul was unloaded, the relationship unraveled. He was on to someone new.

During this transitional period in her life, while working at a temporary job as she settled herself, she was volunteering at a gala. A photographer was there snapping photos. She was wearing her Grandmother’s vintage ball gown and dancing and laughing with the girls. Later, in the parking garage, as she bumped the car beside her backing out, she stood assessing the damage and heard, “Is that your car?” It was the photographer. Fast forward to now, eighteen years later, she continues to shares her life with this amazing photographer and beautiful soul, Mr. Kim Coffman. They recently married and reside in their dream home in Florida on a street speckled with quaint and historic bungalows!  They share their lives with four fabulous felines.  They both enjoy traveling, working on crafts, using glitter, playing, learning, growing, laughing, walking, talking, and experiencing a joyful, love-filled life.  Sandra is a 2000 alumni of the Woman Within program. As a result, she has staffed many transformational weekends and guided many Empowerment Circles earning the title of Lead Empowerment Circle Guide. This program along with the teachings of Mary Kay Ash and Louise Hay opened Sandra’s eyes to the power in her beliefs and increased her awareness that some of those beliefs served her well and others, not so well.

2000 is also the year that Sandra became a “dream team” Sales Director with Mary Kay. After falling in love with the product, the company’s philosophies; as well as, the teachings and wisdom of Mary Kay Ash, Sandra’s world began to turn pink! Sandra’s greatest achievement beyond achieving the rank of Sales Director was being on the Queen’s Court of Personal Sales. At Seminar, MK’s largest recognition event, the queens don ball gowns and sashes in anticipation of their famed walk across the Seminar stage to claim their jewels. In 2006, Sandra walked the Seminar stage, feeling such joy; and, once again wearing her Grandmother’s magical vintage ball gown.

To this day, Sandra quotes Mary Kay and lives her principles. She was a master of her craft and Sandra is extremely proud to still be a part of the Mary Kay family and operate her Mary Kay business utilizing the Golden Rule as the guiding principle.

During this time of great pink success, something inside Sandra sparked! Maybe it was coming home to find a beautiful pink heart ring from Mary Kay? Maybe it was being
around a mindset of People/Love versus Profit/Loss? In any event, she ignored the voice in her head and followed the feeling in her heart. Sandra jumped off the ladder (of corporate success) to join the ranks of the self-employed, on a mission to do “good” and help others.

Sandra has lead many, many workshops on personal growth, spiritual growth, skin care/makeup application, customer service, time management, selling excellence, money consciousness, radical self-care, how to effectively run a team, how to set up a sales incentive program, etc. She is now extremely honored to be leading the Heal Your Life® Workshop Leader Certification Program! Sandra has taught new employees to senior officers. She has been a featured speaker at luncheons/meetings and has made an appearance on Great Day Houston. Sandra has published six short stories. And, she has taught an old dog new tricks.

By taking leaps of faith, experiencing a whole lot of life, and learning the art of self-love, Sandra is happy to have found her passion and eagerly shares it. Sandra has been described as energetic, vibrant, sassy, of integrity, sincere, authentic, playful, fun, bouncy, intelligent, and safe. To sum it up, Sandra has a zest for life and a quest to share love on this planet and help heal our wonderful world.

Like my story? Can you identify a need or want in your life? Let's connect and make Magic happen together!

Helping people learn to practice radical self-care, to experience the magic of life and apply a playful approach to shaping the future of their dreams. The Happy Goddess (aka Sandra, aka Happie G) offers a variety of customized group and one-on-one coaching, workshops and online programs. Visit my shop for more details on the programs and level of investment.

I'm Interested! Take Me to Where I Can Learn More!

I appreciate you and thank you for spending time connecting on my site. If you would like to get further insights please consider joining my monthly Love Letter. You will also get a free gift when you join.

This site uses cookies and other tracking technologies to assist with navigation and your ability to provide feedback, your use of our products and services, assist with our promotional and marketing efforts, to improve user experience, and provide content from third parties. For more information about cookies see ourPrivacy PolicyAccept
Privacy & Cookies Policy